"Myrna Balk’s art challenges the world to Acknowledge the imperative need all of us to Champion and Promote human rights worldwide."

Through her expressive sculptures of clay, bamboo and steel and a broad grasp of printmaking technique, including etchings, monotypes and woodcuts, Myrna Balk asserts the essential dignity and humanity of abused women. With a light, almost innocent touch, her allegorical works brings us into shadowy environments that feel both domesticated and dangerous. Her courageous guidance empowers us to look with compassion on victims sex trafficking, genital mutilation, hunger, and the Holocaust.

Balk attended the University of Iowa, Case Western Reserve University in Cleveland, Ohio, and the Museum of Fine Arts, Boston. She began to work in larger scale after studying welding with Anthony Caro in 1983. Her work was shown in Beijing in 1995 in conjunction with the 4th United Nations World Conference on Women. And her work has been shown internationally in Cleveland, Glasgow, Beijing, Budapest, and Nepal.

She recently completed a Dunes Residency at the Cape Cod National Seashore in Provincetown, MA (2015). In an international residency, in 2008, at the Ambani Foundation in Mumbai, India, she created large-scale works in marble, sandstone and bamboo that are included in its permanent collection.

Balk has received grants from the Brookline Commission For The Arts in 2006 and 2002, and also from the Cambridge Council For The Arts in 2002. In her companion field of social work, Balk was awarded a Centennial Alumni Award from the Mandel School of Applied Social Sciences, Case Western Reserve University, Cleveland, and she also received The Beverly Ross Fliegel Social Work Policy and Change Award from the National Association of Social Work in 2003. She has also received numerous awards for her sculptural gardens from the City of Boston.

Most recently, in 2020, a joint Live Arts Boston grant from the Boston Foundation was awarded to Myrna in collaboration with Fernadina Chan, a well-respected local dance choreographer with the Continuum Dance Group. In 2021 they will use Myrna’s 10-foot diameter wood sculpture as the set for a new original dance reflecting on contemporary issues of immigration and abuse. 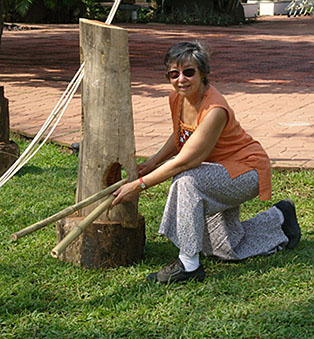 Myrna Balk grew up in University City, Missouri and attended the University of Iowa where she majored in art and sociology. Myrna received her Master's Degree in Applied Social Sciences from Case Western Reserve University in Cleveland, Ohio, and later studied sculpture and printmaking at the School of the Museum of Fine Arts, Boston.

She has received awards for her bamboo sculpture and photography. Her etchings have been shown both locally and internationally. Myrna was awarded the Beverly Ross Fliegel Social Work Award for Policy and Change in 2003. Some of her etchings, monotypes and woodcuts were shown in Beijing in 1995 in conjunction with the 4th United Nations World Conference on Women. In 2001 she was invited to document, with photographs and etchings, the lives of Dalit women in a remote section of Nepal. Her etchings referencing international sex trafficking were shown at the United Nations Headquarters in New York in 2000.

She is a member of the Brookline-based artist collaborative, Studios Without Walls. In addition to numerous local shows in Boston and Cambridge, she has exhibited in Cleveland, Glasgow, Beijing, Budapest, and Nepal. Recently she was invited to the Harmony Artist Residency in Mumbai, India to create installations in black marble, sandstone and bamboo for the permanent collection of the Ambani Foundation.

Myrna has taught in many graduate schools of social work including St. Xavier’s College in Kathmandu, Nepal. 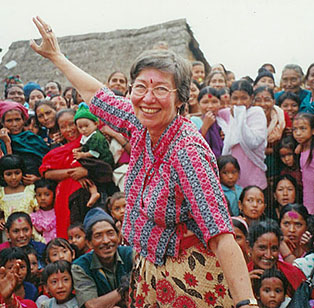 Myrna was invited to the village of Kot Goan in the district of Gorkha, Nepal. Dancing in the village. 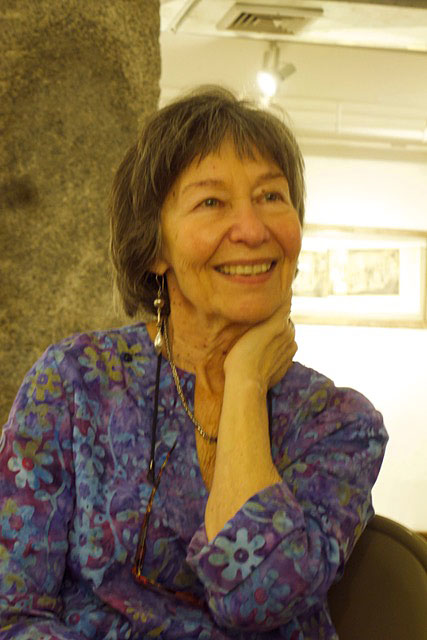 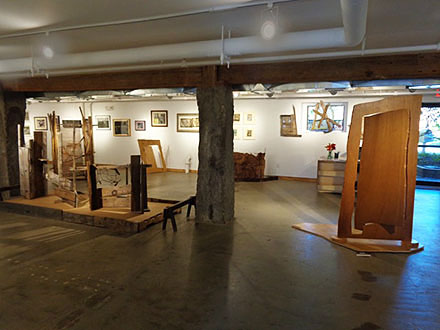 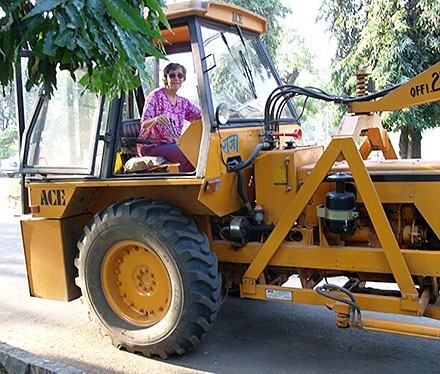 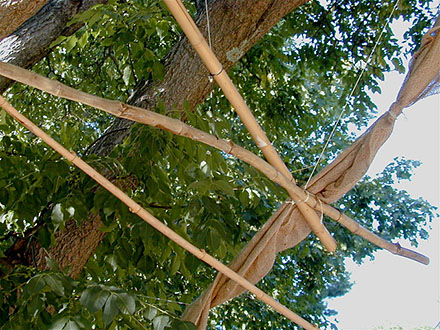 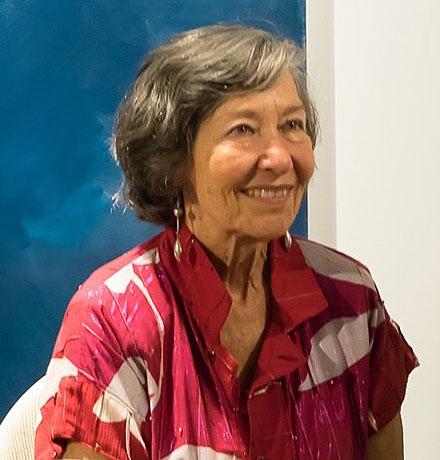