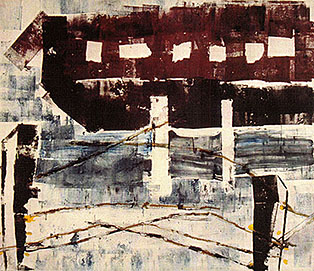 The "Holocaust Industry" is an unsettling phrase. It implies that a set of workers — fund-raisers, writers, movie directors — make a tidy living out of a second-hand connection with tragedy.

Artists must respond to whatever moves them. The recent exhibition of the work of Boston etcher Myrna Balk was inspired by the preserved remains of the death camps at Birkenau, Auschwitz, and Terezin. Balk visited the camps as an ordinary ticket-holder.

The work she produced in her studio afterwards has, on a casual viewing, a simple quality — views of smokestacks, rooms, and railroads, seen from mid-distance, lacking background, foreground, human figures, vegetation. Most are black and white; in a few Balk has sparingly added color. Some etchings are almost abstractions.

But the impression of aloofness quickly vanishes. "Electric Wire" is one of the almost-abstractions. Two pale grainy vertical masses (they are wooden posts) are barred horizontally with slender black lines, three of which end in still paler cylinders casting a weak glow. The apparently arbitrary arrangement begins to shudder with meaning.The posts are not seen in their entirety, and the viewer realizes that these two represent thousands of similar wired stanchions. The black space between them is despair.

The monotype stencil "Birkenau" presents eight stylized barracks low broad rectangles punctuated with doors and windows, four descending the left side of the paper, four descending the right. They are like lines of grim print in an open book. And then the viewer remembers, as if invited to do so by this subtle artist, sunny paintings of Mediterranean towns, where dwelling perches atop dwelling; where people thrive.

Several works are called "Barbwire". One is a simple glyph — a lone tipsy line crossing four more or less vertical ones. Another, with busier lines, suggests the playfulness of Miro, who was also fascinated by nothingness and anguish. A crosshatching motif resembling intersecting wires appears in the spaces of some of the other works, like a ghost.

Three intaglios inspired by Terezin, the "model" camp which passed inspection by the International Red Cross, represent a wall; a shaving room; and a shower room. Harsh diagonals suggest that here corners may peel apart and parallels may converge. Despite this uneasy geometry the shaving room with its rows of faucets (one broken, another missing) and the shower room with its single window are particular places and could have been entered by the living.

This hint of past human habitation deepens in the final three etchings. each one called "Bunkbeds". The first depicts in broad(white strokes), on a black background the iron configuration of several bed frames. In the second, four views of tiered beds are presented in one arrangement and then repeated in a different arrangement.

The higgledy-piggledy result gives an impression of crowding without itself being, a crowded work. In the final monotype twenty-seven parallelograms are arranged in groups of three; now we see both the crowding and the infamous Nazi orderliness.

The upper left corner of the paper is blank, an ironic version of the Orthodox practice of leaving a corner of a room unpainted in remembrance of the destruction of the Temple.

Myrna Balk bears witness to the death camps — not to their horrors fifty years ago but to their disorienting effect today. She has mounted her works on boards and has bolted a protective sheet of plexiglass to each board. Archivists and memoirists of the Holocaust try to carry us across the distance separating us from their experience. 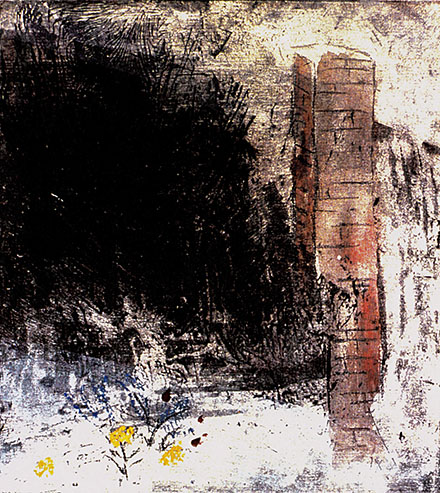 Unexpected Journey: Holocaust Series
In 1993 I visited the remains of three concentration camps: Terezin in the Czech Republic and Birkenau and Auschwitz in Poland. When I returned to my Boston studio I felt an urgency to depict visually the emotional reaction I’d had.
Camp With Barbed Wire (below)
Drypoint/Monoprint
18" x 24" 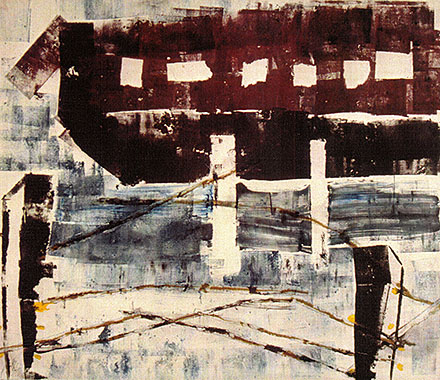