Statement and Review: Art as Witness, an Exhibit at the Boston Public Library

Moving silhouettes, fragile and fearful, but nevertheless, beautiful silhouettes that remind us of the texture of light and the depth that can only be achieved through a desperate search for faith. Those are the figures delicately traced by Myrna Balk. She has been able to capture, feel and understand the dignity of Nepal’s women and the dignity of their daughters: women who were violated in the deepest sense. These women were abused as children and have lost all possibility of illusion.

Myrna Balk’s etchings have the capability of subtly inviting us to meditate and understand the destitute lives of these women who live in the most terrifying conditions and who must sell their bodies. However, Balk’s work does not only stem from a feeling of empathy for these women’s lives. It is rather an audacious and rousing view that assaults our senses and forces us to ask questions and become participants in these women’s lives and to feel part of an existence that on the surface seems to be so distant from ours.

Myrna Balk’s etchings play with the possibility that absences leave behind a presence, a light that seems to radiate from the most intimate depths of these beings that have been disrobed of their history and dignity. Yet, these women go on living. They recover the ability to dream and hope. The continuation of their lives seems to flow freely from Balk’s hand.

Each of these etchings reveals a history but it is also the messenger of a history beyond our own, beyond light and night. Balk’s figures recover life; they grow, are born free and are freed thanks to the possibility of their grand and silent art. Myrna Balk’s art teaches.

They say a picture is worth a thousand words, but when the picture tells a story of violence and victimhood and when the artist herself had lived the picture, the word count quickly approaches a million.

In "Art as Witness: Shattered Lives/Unshattered Dreams," on display through March 30 at the Boston Public Library, viewers get a first-hand glimpse of the horrific reality experienced by hundreds of Nepalese women. It is a bittersweet story. Viewers can expect to come out of the exhibit with conflicting emotions, ranging from rage to despair to hope.

Organized by Myrna Balk, a Boston artist and social worker, the show features drawings by Nepalese women, as well as etchings and photographs by Balk that chronicle her experiences in Nepal and the social issues she faced during her time there.

Balk had traveled to Kathmandu, Nepal, in 1998 to consult with a non-governmental organization about the issue of domestic violence. She also taught at the School of Social Work there, where she met and worked with women and girls living in local shelters ”many of them victims of domestic violence and forced prostitution in India."

All of the art in this show accomplishes what it sets out to do” to raise awareness of the plight of women in Nepal and tell the story of shattered lives in a way that somehow strengthens the power of their dreams.

The collection is unpretentious, intimate and honest. The drawings and the stories told by the accompaning captions are heartrending. The women who drew them clearly wanted deeply to share their experiences. Somehow, the knowledge that they had done the drawings themselves gave the collection much more meaning and a sense of validity. Many of them had never drawn before, according to an exhibition flyer, but the urgency of their purpose helped them overcome their self-consciousness. Their childlike compositions capture, with wrenching irony, a stunning reality and a deeper wisdom.

Two conflicting themes of the show were betrayal and empowerment. Many of the stories behind the drawings involve women who were tricked by strangers and kidnapped to India, where they became sex slaves. Some even had husbands who did the unspeakable: turning over their wives to the sex traffickers in exchange for money. Many were only allowed to return to Nepal after they had contracted AIDS. Others drawings reveal the terror of living with an abusive father.

Sabita, age 13, submitted an impressively detailed drawing that captured the sadness, pain and injustice of her situation. Done entirely in ballpoint pen and green, pink, yellow and blue markers, it depicts an infuriated father dragging a tearful mother to some unknown and horrifying place. "My father would beat my mother even more when she was pregnant," Sabita wrote.

Balk's etchings are stark and striking, reflecting the crudely innocent style of the women's drawings. Her themes are also merciless in their truth and unrelenting in their exposure of cruelty. There is "Send Them Home to Die" done in etching, aquatint, and softground, in which women with broken bodies walk single-file down a hill, perhaps to death, perhaps to hell. But their lives are already a sort of hell.

Laced throughout the exhibit, though, amid the anguished cries for a better world, there is a strand of hope. Seventeen-year-old Neera, for instance, drew a chain of women joining hands and "organizing to solve the different kinds of social problems."

But nowhere is this attitude more apparent than in Balk's photographs of the women themselves. Balk completed the series on a trip to the village of Kot Goan in the district of Gorkha. Done in black and white prints, the photographs are intimate and gripping, with a distinctly documentary feel that manages not to alienate the viewer or the subject.

The photographs reveal the daily lives of grandmothers, young women, and little girls, all retaining a kind of beauty or strength despite their weathered surfaces. They are not disconsolate or even depressed, they are thoughtful and surviving, many of them even smiling. One does not feel pity for these women, but one feels their pain. As one mother said, "I am eager to go home now because now I understand that my daughter is as valuable as my sons." 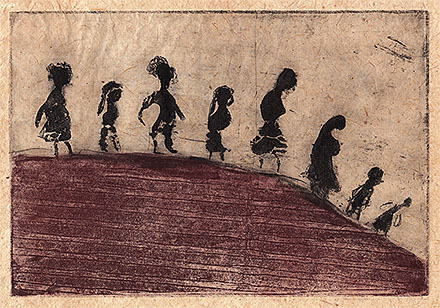 One is Too Many: a series on sex trafficking. 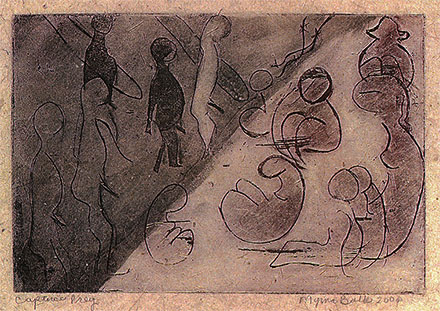 Drawing and Story by Kumi
Kumi told Myrna about her drawing:
"The parents are depressed because a broker took their child away from them. It shows a place where girls are taken and given cruel treatment. Letters are drawn on the right side of the picture because now the girl is learning to read."

This 20-year-old woman explained that she had no chance to go to school. She wants to study but she thinks she is too old. She loves the experience of learning to read. In 1996, Kuml was brought back to Nepal from India, where she was a held captive in a brothel.

She immediately returned home, but was ostracized by her village. She then went to ABC Nepal, an NGO that shelters former sex slaves. ABC Nepal is working to educate the village, in the hope that they will take herback.
Maya
Photography

Photographs: Nepal 2001
Maya and her husband were dedicated to the education of their five daughters.